Ah yes. My life changed so much in 2017 that I wasn’t able to mention any of it in my annual New Year’s Card which really should be labeled the annual Martin Luther King Day card because that is about when it gets out. The Card and accompanying letter are kind of like blog posts. These things offer little room to tell a story adequately. So I simply give you little snapshots and you can connect the dots. If you want more details or background, send me emails or phone calls – someday comment on my posts. If you do, I’ll play with how to share more of the story. I love when people are willing to play the game of “story” with me.

Today – right now, I have some backstory for you. Since 1990, I’ve been depressed as all heck between Martin Luther King Day and Valentine’s Day. Sometimes the window has been shorter, but not often. Hockey season really takes its toll. About this time of year since 2005, I’m deep into being the parent of youths in hockey and wow. There’s so much to all of that, but it is really a very different story. And this situation started 15 years before my hockey mom days. These dark weeks of mid-January to mid-February since 1990 take me down because every year I’ve been missing someone who’s birthday is January, 29th, my son, Cassidy.

Cassidy was the name his dad gave him and I agreed. The parents who raised him named him Nolan. This particular story about Nolan could be a book. Maybe it will be someday. But for now, let’s just connect some really basic facts. I was pregnant at 18, a freshman at Cornell University. I always had irregular periods and no other obvious pregnancy symptoms. In fact, the home pregnancy test said I wasn’t pregnant. I was 12 weeks into it when I learned the news. One health professional basically said, abortion tomorrow or kill the baby in the big city on Monday. I said no thank you to any of that. There was a whole world of mess that followed and eventually I signed the papers that are akin to a deal with the devil. My first born son was gone minutes after I gave birth and I was never the same.

Jump way out of the back story and into the amazing reality of fall 2017 when Nolan sent me an email. A few short weeks later right before Halloween, we hopped onto a magic carpet ride of a weekend in NYC. Nolan and I decided it was nice to go on walks and sip tea and get deep with tough questions. We took a terrific selfie together. We are sending emails and texts from time to time and perhaps he’ll be visiting Montana soon. Regardless, thanks to the fall of 2017, once again, I will never be the same again.

I’m grateful to all who held my hand along the way. I’m especially grateful to those who helped me cry and dry the tears of grief and rage. And now there are tears of joy and wonder and more gratitude. 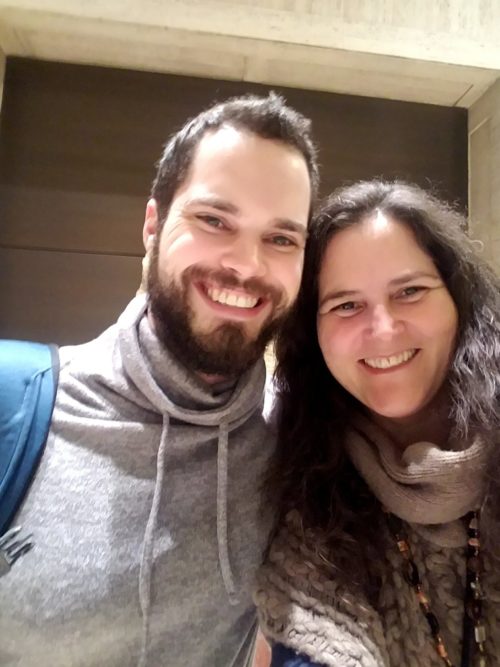